No looking back now Rules for dating MY daughter

Rules for dating MY daughter 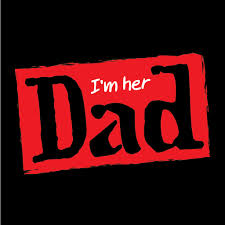 I don’t know what is worse driving after a foot of snow has fallen, or driving after a foot of snow has melted.  You need cat-like reflexes and a steering package akin to a Formula One race care these days to miss the crater sized potholes all over the road.  Not just back roads, main drags, highway, throw in the Interstate while you are at it.  Not exactly looking to buy new tires any time soon.  Might not matter though in breaking news tonight all car dealerships in the area are now selling gondolas.  It’s the only way to get around town right now, personally I’m hoping to get one like James Bond had in Moonraker.  I’ll be prepared for land or water, I did earn my Cub Scout badge when I was a young lad.  I may not always “be prepared” like a Boy Scout, but I’m a little ahead of the game on this one.  In other happenings today no word from Sunny Leone.

It’s my turn to be the janitor this weekend, err “custodial” parent (I will always hate the term custodial), interesting night with the blonde bomber and also I’m screwed (more on that to come).  After the always warm and fuzzy reception I receive from the residents at Sloane’s other house, the blonde bomber was racing to the car before I could even get her European vacation sized travel bag over my shoulder.  I’m not even out of the driveway and she is going on about something that pissed her off at school.  Don’t remember the details but one girl said this, one girl said that, bottom line SECOND GRADE is where the term “clique” was born.  It’s like a pre-adolescent training for high school cliquery (is that a word), the topper was “student X had me P-I-S-T-O-F-F”.  I asked her to repeat that and she did to verbatim, where did you hear that from?  Take a guess, and not me thankfully!  I actually had to crack a smile though, when she is older I will let her know the proper term is pissed off.

We ended up at the hospital visiting our favorite loopy lupie.  While listening to my friend update me on her prognosis and how much she just loves being at the hospital for the past 40 days, her husband and youngest son showed up.  Sloane is classmates with her son and this is where I learned I’m screwed.  They played like two kids on a play date, and for as boring as a hospital room can be they sure had a great time.  When is was time to go Sloane asked if her friend could stay the night some time or she could stay over there.  I know there only kids and that’s cool, but this is where it gets funny, I say funny, not awkward because both of these kids are sweet and innocent and have no idea about “grown up” issues….I HOPE.  As the two of them were planning the perfect sleep over the terms they were using sounded like two teens that were trying to…ahem find some alone time.  “You can sleep in my bed it’s plenty big enough for the two of us and when we wake up my dad will make us breakfast”, followed by “We can watch a movie and fall asleep on dad’s recliner”.  The three adults in the room were looking at each other cracking up, but Sloane is determined, the whole way home it was when can he spend the night!  Slow down sweetie, let daddy process this stuff because in a few years these are going to be real issues!  When she starts “developing” it’s going to be a wild ride to say the least.  Thankfully, I’ve still got a few years before I have to worry about this.  Is all part of the progression of parenting.

I’ve got dad friends with beautiful daughters and I ask the obvious questions of “How in the hell did you do it without killing someone?”  I get varying answers but the main undertone is “raise them right” and those issues take care of themselves.  That isn’t going to be a problem on my watch, but listen hear future high school jock quarterback she comes home on a date with you after seeing “Rocky 12-Rocky Needs a Paycheck” don’t think you won’t be on my radar!  For one why would you take my little princess to see a movie about boxing (hell by Rocky 12 he could be a cafeteria worker getting into with the gym teacher) go talk to your dad!  I guarantee you he “bit the bullet” in the early days of dating and took your mom to all three Twilight movies when they were released or at least rented them and spent an all night Saturday viewing session fighting off sleep.  Because that’s what good guys do!  You treat her like I treated her mom many moons ago, like your dad treated your mom when they first met, the ball is in your court don’t dribble it off your foot.  For me it was Titanic and the re-release of the Little Mermaid, for other guys it was the Twilight series or anything with Channing Tatum, just be forewarned she gets treated like a princess or you and I are going to have problems.  I’m cool with second grade sleepover’s if everything works out, but not going to be cool with any sleepover with my daughter no matter what her age is if she isn’t getting your full attention!  You will get your turn to feel special eventually, but at first you have to suck up your pride and make her feel special.  If you don’t you aren’t going to make it in “my world” and no matter what you think of her mom you damn sure better impress me!