No looking back now The KGB conspiracy and other ramblings

The KGB conspiracy and other ramblings 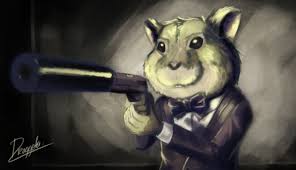 Another superb day of weather, another two miles of liberating pavement pounding, and what do I come home to? A drunk hamster. I don’t know if Hammy has an extensive enough pipeline back to Mother Russia to get authentic Russian vodka or enough hamster runners to get the word out to his spy network down at Big Joe’s Liquors but either way Hammy got on a bender while I was out this evening.  Food bowl flipped over, bedding all over the place, water bottle knocked down, his cage looks like a teenage girls bedroom.  I’m thinking sleep deprivation for his insubordination, maybe the warm weather has him feeling frisky.  Little hamster you can protest your conditions all you want, but you aren’t getting a conjugal, nor are you going to run free.  Your new Syrian friend will be here soon enough, and Sloane wants to put you both in the same cage.  My advice to  you is get your underground network hamster spies to smuggle you in a shiv or two so you can get them strategically placed and hidden.  I’m not going to stop you but next time the blonde bomber does a bed check you better have them hidden very well or you are going to get thrown in the torture device known as “the ball”.  You never know what is going to happen at this house I think I’m going to have to start putting Hammy in a closet when I watch The Americans, he’s getting too many ideas lately.  Of all the hamsters in the world, I get stuck with a sleeper KGB agent, one of these days my luck is going to change!  It might be a blessing I no longer have Suebee , they would be conversing in Russian and talking about Rubles, Russian hockey, and the Ukraine problem.  Or Suebee would just eat him, the point it is you can’t trust a Russian living domestically in the states.

The previous is all fiction, I have no issues with Russia, I am friendly with all ethnic groups even Kentuckians!  This is just another snippet of the untitled and unreleased hamster spy wars novella that may or may not ever get written.

Lately, I’ve been expanding out of the norm in blogger world.  I’m still an active member in my Facebook:  Dad Bloggers group (those guys rock), but after reading The JackB I realized I’m not in their league in terms of blogging with kids.  Anybody that actually knows me read a few of his posts you will understand why I like his writing.  Underhanded snarkiness is a lost art!  Most of those guys in my dad blogger group have kids still in diapers, or a child on the way, or dealing with the joys of raising toddlers.  Since my blog is through WordPress and I have a Google blogger account I have access to literally a zillion blogs some are interesting, some are funny, and some just plain suck (like mine).  I’ve ventured into the world of mommy and lifestyle bloggers too, they write better than me and are way more creative with their blogs.  If there is one thing I’ve learned since blogging is the British are frigging hilarious.  Especially Americanized one’s, when you call your blog BritishMumUSA you totally get it.  Blonde problems and fighting a crippling disease you never lose your sense of humor.  That is what goes on at welcometomycircus.  You even meet people online that have been through situations eerily similar to mine, insidemartynsmind is just that guy.  He home schools his boys (former teacher) and I consider him as much of a  friend as anybody I know personally.  I get to take Sloane to the park, he gets to take his boys to castles!  I never had the desire to go to the U.K. but after reading this I became über jealous.  Two castles within ten minutes!   If you want to get your blog read you befriend the Robin Hood of bloggers Harsh Reality, this guy is Rambo minus the bad acting and cheesy lines in blog land.  Luckily he and I agree on a lot of stuff or I would think he was a dick (just kidding), but he promotes and “pays it forward” in blogger land more than anybody I’ve come across.  Plus when he gets on a rant its literary gold.

It’s one giant melting pot in my world these days, from KGB hamsters to blogger friends I never knew existed a year ago all over the world.  I wouldn’t want it any other way these days, though!